Sorry, but the SOUTH COAST ONE DESIGN No.76 listing has already been removed.

Get an email notification when another vessel like this is listed

We also have the following similar vessels currently advertised:

26ft. SOUTH COAST ONE DESIGN SLOOP - Exemplary   £14,000
HISTORY & DESCRIPTION: The South Coast One Design needs little introduction as one of the most successful yacht designs of the mid 20th Century. In 1955 a group of Island Sailing Club members approached Charles Nicholson to design an inexpensive fast one-design cruiser/racer. The first six boats built by Lallows of Cowes all competed in the 1956 Round the Island Race winning the first six places overall. The SCOD, as they became known, proved to be all that was wanted as a one-design and in all, over a period of about fifteen years, 106 boats were built by various boatyards, mostly on... read more 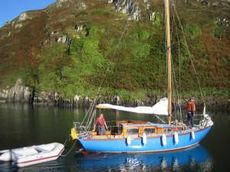 South Coast One Design
Cognac is a South Coast one Design 7.7 metres long keeled cruiser /racer designed by Charles Nicholson in 1955 sail no SC14, built by Woodnutts in 1956 she has a full set of sails, redecked in 2009. engine yanmar 1 gm 10... read more

Boats for sale
by continent

Boats for sale
by country